For a long time I’ve wanted to make a much more stealthy method of control. When I first started R2, I’d considered using a Wii remote and nunchuck, but I realised that as I’d already done the PS3 controller code, it wasn’t that much different to use a PS Move navigation controller. They show up as a standard joystick in Linux, so easy to interface with. 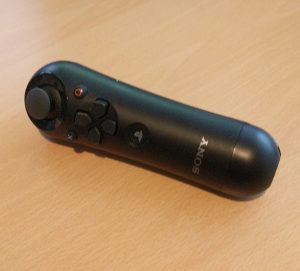 As the code for this wasn’t going to be changing much from the ps3 code, I pretty much just copied it over to give me a foundation. Currently it only supports a single navigation controller, but the plan is to allow two controllers to give me more options and things I can trigger.

The main drawback at the moment is the lack of dome control, but that just gives me more reasons to finally get round to doing some automatic dome functionality.

Battery life is an unknown at the moment, and as with the ps3 controller it doesn’t seem to charge unless plugged into a computer.

Along with doing this code, I also worked on getting it easy to switch between the different control systems. There is now an API call to list and select a different joystick, with options to call it via both web and telegram at the moment.

This site uses Akismet to reduce spam. Learn how your comment data is processed.

There are no upcoming events at this time.